Owen making & melting metal Here are a few examples on how to make owens for everything between bronze casting to glass beed making. And some other ways to heat and melt metal. First up is one of the first glass beed owens made in frostheim. Björn Sneskägg shows you how its done. 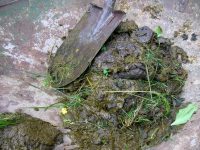 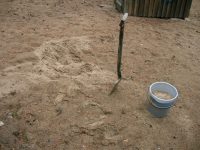 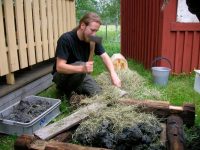 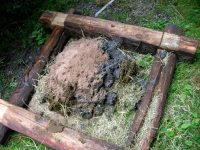 These owens are built by clay, you migh buy some or get it from nature, here comes some other materials you should not need to buy. Sand should always be added to the clay, and often more than you might think. cut grass/weed might be good to add especially when you as shown in this picture have cow dung wich has less fiber than that from horses. 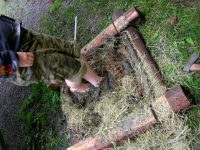 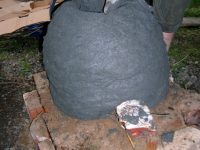 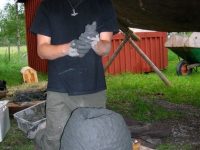 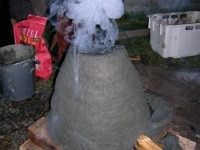 Mixing it, and adding util you get a perfect blend. One have to do this a coupple of times to get the feel for the material.Putting it all together. With quite thick walls one does not need any other material. With a wowen center of for example thin sticks one can make a thinner and quicker to dry owen. To get it up a bit from the ground both gives you a better working enviroment and keeps moist from the owen. What you build it on depends on how period you want to be To get as few cracks as possible dry it slowly. I have seen and done everything from as seen here, making it one day and burning it slowly the next to having it dry for 2 weeks and then burning it. The slower you go the less cracks 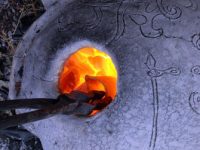 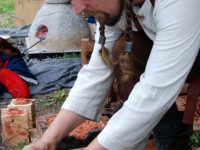 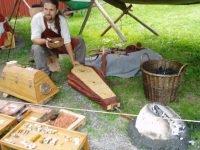 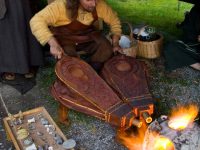 Far left: A thin, light and effective casting owen built on a woven neetwork with a funnel where air is blown in to focus the heat and a small opening in the top to put in the crusible for melting and one on the side to burn the molds and adjust the coal. Built by me 2008 and it was built on a portable rig so that I do not always have to make a new owen before a class. It is the owen that has seen most period production and most bronzecastings. Second left: In the front my casting owen, in the back a large glass beed owen built by me and Alrune 2009. It has one funnel for input air and two opeings so that two people can work at once and a lid on top to regulate loss of heat. To the right: One of the first casting owens I ever made. With a lot of work bronze in smaller amounts could be melted but it was more suitable for silver casting and small iron smithing. Far right: The advantage with two bellows is great. You get a even flow of air. With a funnel on your owen you can also keep the bellow at a distance and ensure longer lifetime. 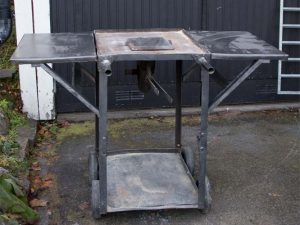 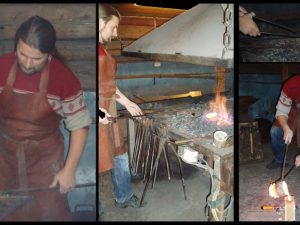 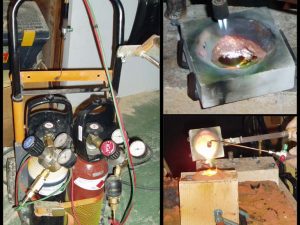 Left: When I was a student workshop space was limited. Therefore this wagon on weels was created. I used to melt metal on it and pack casting flasks for sandcasting on the side tables. Centre: The best thing with a real smithy is the variety of metalworks you can do. Some of my casting is done here, expecially the larger things and sometimes making the alloy bronze in bulk. A tip, do as shown in the picture, melt the copper and then add the tin or the tin will boil away and you will not know what alloy you are casting. Right: A lot of my modern casting and some of the massproduced historical copies are made at home with acetylen and oxygen. The advantage is that the metal melts fast and you can keep heating it until the pour making it as easy flowing as possible. You also do not need a second person working the bellows…